Bayside Christian College uses an open-source Mac software management system called "Munki", developed by Walt Disney Animation Studios, to install and update software applications on Mac OSX. This article explains how the system works from the standpoint of the end-user (staff and students). 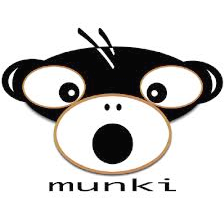 Munki was created and provided (free) to the world by Walt Disney Animation Studios, and is used on a large scale by companies including Google, Facebook, and Walt Disney to manage large fleets of Mac computers. Munki assists with keeping computers up to date with the very frequent software updates released by software companies.

Munki or "Managed Software Update" as it appears to the end-user, provides a way to efficiently install and update software applications on Mac computers in a timely manner. Updates can be installed in a self-service fashion without needing an Admin password. If no one is logged into a computer managed by Munki and an update is required, the update will be installed automatically in the background.

p.s. "Munki" is pronounced like "Monkey". Why a Mac management system was named after a simian is anyone's guess. Other than the fact it was created by the same people that brought us Bucky the Squirrel and Fix-It Felix, Jr. - it was probably just so thousands of computer nerds around the world had a good reason to say "Monkey" all of the time. 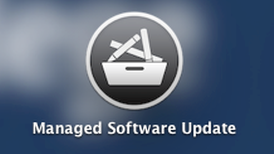 The "Managed Software Update" application is installed on every computer being managed by Munki. This application runs periodically in the background and checks to see if there is new software or updates to be installed.

This application can also be manually started on your computer to check for updates or Install optional software applications.

The Managed Software Update app will run periodically on the Mac (or it can be launched manually by the user). When the application is checking for new updates, the screen above may appear. 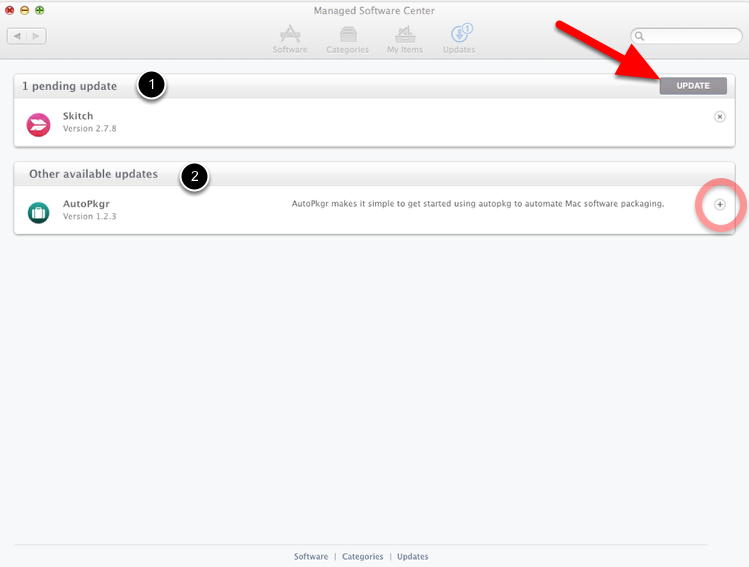 When any new updates are available, they will display in the "pending updates" section (1)  and these updates can be applied by clicking the "Update" button. If an update requires the user to logout or for the computer to be restarted, the user will be notified.

Updates for optional software will display in the "Other available updates" section (2) and can be updated by clicking the + symbol to add them to the list of pending updates.

NOTE: If there are software updates available, it is highly recommended that you install them as soon as it is convenient to do so. Delaying software updates repeatedly may result in potential security risks for your computer, and you will be continually "reminded" of the pending updates until they are installed.

Your Software is Up to Date

If there are no software updates available for your computer, the screen above will appear after the check for updates is completed. 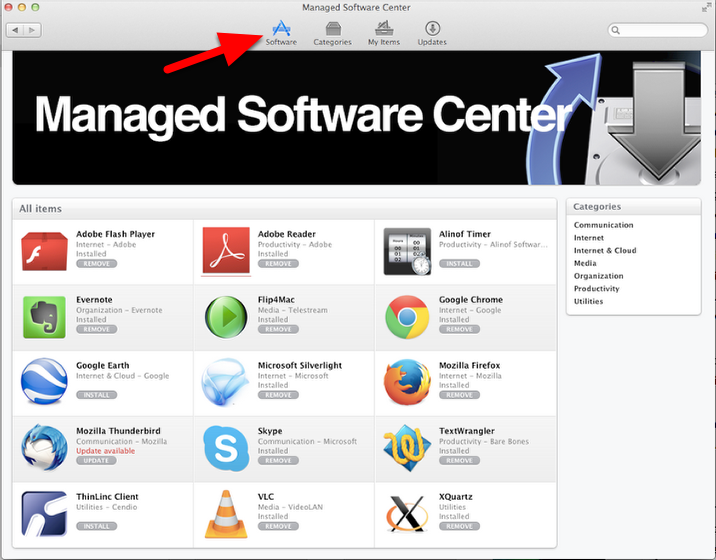 In addition to checking for software updates, the Managed Software Update application is also a self-service kiosk that allows users to install or uninstall optional software applications as needed. 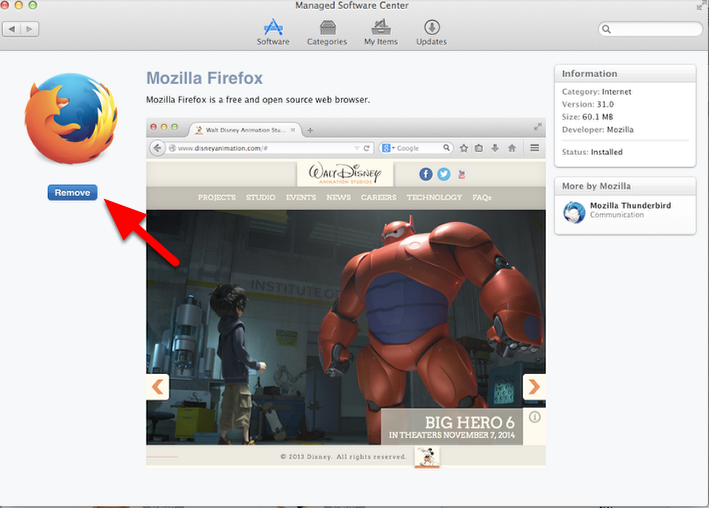 Individual applications can also be installed or removed from this screen by clicking the "install" or "Remove" buttons below the application icon.

When software is being installed automatically when users are logged out, or when a user has manually ran updates requiring a logout or restart, the screen above will appear. Once the updates are completed, the login screen will display.

NOTE: If the software updates need to be delayed, they can be stopped by clicking the "Stop" button. The updates will continue the next time the computer is logged out, restarted, or the user initiates them again.